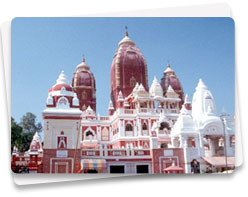 Popularly Known as Birla Mandir, it's a large Hindu Temple built in Orissa style in 1938, by the renowned Birla family. People of all faiths can worship at this temple.
»Book cab for Laxmi Narayan Temple 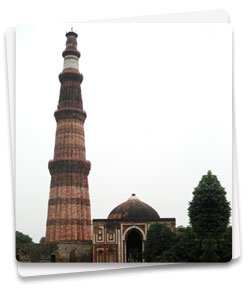 Qutub Minar is an excellent example of Afghan Architecture. The Minar is 72.5mts high victory tower, the construction of which began in the final year of twelth century by Qutubuddin Aibak and was later completed by his successor. It has been given World Heritage Site status.
»Book Cab for Qutub Minar 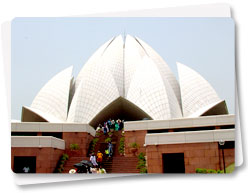 Situated atop the Kalkaji Hill. Its is also known as "The Lotus Temple" due to its distinctive lotus shaped design in Marble. It was built in 1987 by the followers of Bahai faith. The temple signifies the purity and equality of all religions.
»Book Cab for Bahai Temple 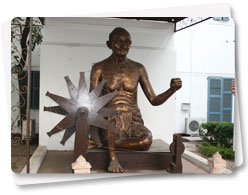 The Memorial consists of: (a) Visual Aspects to perpetuate the memory of Mahatma Gandhi and the noble ideals he represented, (b) Educative Aspects to focus concentrated attention on certain values of life that made Gandhi a Mahatma, and (c) Service Aspects to introduce activities in order to subserve certain felt needs.
»Book Cab for Gandhi Smriti 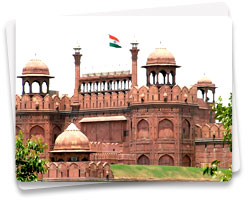 Built by Shahjahan, the builder of Taj Mahal in Agra, The construction lasted from 1639 to 1648 (Monday Closed) Old Fort: Monday Only.
»Book Cab for Red Fort Delhi

The simple square platform of black marble marks the place where the father of the Nation, Mahatama Gandhi was cremated.
»Book Cab for Rajghat Delhi 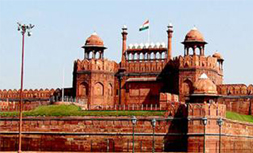 Taxi Service New Delhi, The political capital of India, Delhi , makes up one of the cornerstones of the golden triangle in the country's north. Finding its genesis in the great Indian epic the Mahabharata, as Indraprastha, Capital of the Pandava princes, today the city has transformed itself into a new incarnation. The India Gate, Red Fort, Jam Masjid, Chandni Chowk, Kutub Minar, Jantar-Mantar and many more are worth seeing in Delhi.
»Book Cab for Delhi

Agra is a medieval city on the banks of Yamuna River was founded by Sultan Sikandar Lodi in 1956. It achieved fame as the capital of the Mughal emperors from 1526 to 1658 and remains a major tourist destination because of its many splendid Mughal-era buildings, most notably the Thj Mahal, Agra Fort and Fatehpur Sikri, all three of which are UNESCO World Heritage Sites.
»Book Cab for Agra

Jaipur, the picturesque capital of Rajasthan also known as the Pink city was founded in 1727 by Maharaja Sawai Jai Sing II. It was first planned city in India, beautifully laid out gardens and parks, attractive monuments and marvelous heritage hotels, which were once the residence of Maharajas, are worthy of admiration. Visit to Amber fort, City Palace, Jantar-Mantar, Hawa Mahal, the ambling camels and cheerful people in multi-hued costumes will make your trip to the pink city a memorable one.
»Book Cab for Jaipur